Development Process, In The News

As the developer and designer of all Lofty Mountain Chalets and furniture in the Chalets, I am astonished at the public’s passion and appreciation for the style called RUSTIC INDUSTRIAL.

Rustic Industrial is the foundation of our style at Lofty Mountain. We have been building our Chalets for years using supplies and materials from sources we’ve cultivated over time. We personally take down many of the barns used for woodwork and to design unique pieces to make your home one-of-a kind.

If you are looking for a home with real, old-time craftsmanship, let us build your family legacy and deliver a lifestyle many would dream of.

These models will be located higher on the mountain and will still provide the craft that creates the 4 season rustic industrial cabin at an affordable price point. Our new model called “Valley View” accomplishes all of the points above. This unique 4 season chalet will have a starting price of $325,000.

Interested in a showing? Call Mike today at 716-583-0535. Receive a tour of completed and sold chalets so you can view the details and finishes, along with custom furniture that Lofty Mountain Homes will offer in the Valley View Chalet Model. Buy now and be ready for ski season!

These award-winning custom timber frame chalets, located in East Otto, New York — just minutes from Ellicottville — are carved within nature’s beautiful mountain landscape and provide the perfect escape from the hustle and bustle of everyday life.

Developer Mike Incorvaia, who grew up nearby, knew others would appreciate this “wooded playground.”

Dana John Contracting constructed eleven 2,300 and 3,000-square-foot, three-level chalets as part of Phase I, all of which have sold. Five homes have been constructed so far as part of phase II.

What sets Lofty Mountain chalets apart? It’s the many extras — which, are in fact, standard – that create a rustic, elegant, yet comfortable, charm you can’t wait to come home to.

Incorvaia has a passion for finding unique and interesting materials and repurposing them when building his chalets.

“People call me when a barn or building is being torn down. They know I will make good use of the materials, they won’t be destroyed or land filled,” says Incorvaia, who enlists local experts to dismantle, inspect and treat materials he purchases and hires local craftsmen to do much of the work by hand.

Bricks used to create visually appealing interior walls might have come from a demolished building near Buffalo’s Broadway Market. Many exterior and interior walls are constructed from 8’by 8’ locally sourced Civil War-era white pine beams or wood from a nearby 100-year-old barn.

Read More at The Buffalo News

Chalets on lot 19 and lot 3 are sold (view the Rainbow Ridge (phase 2) development map). Lofty Mountain Homes has started the development of a new cabin on lot 13. Call us today to put your finishing touches on your home away from home. Call Mike at 716-583-0535 today. 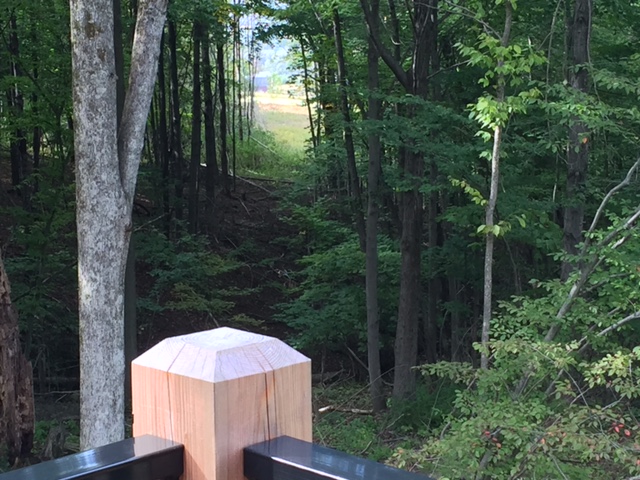 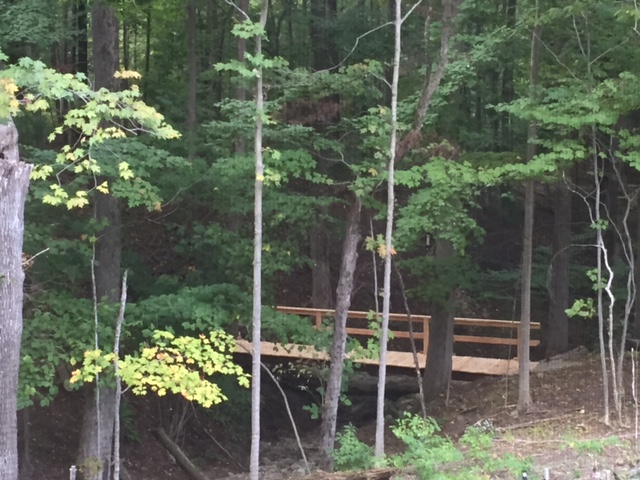 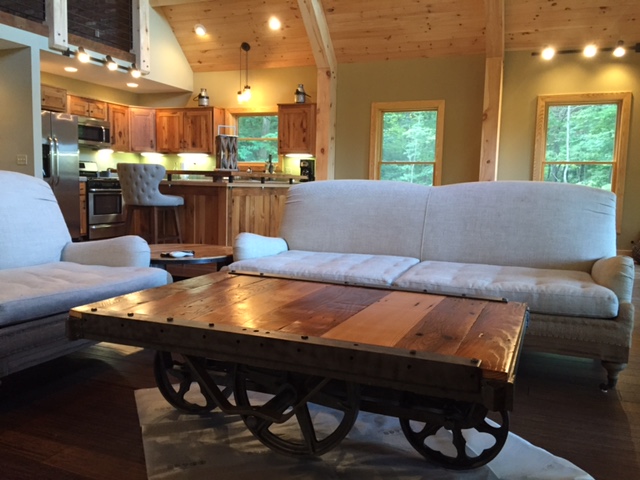 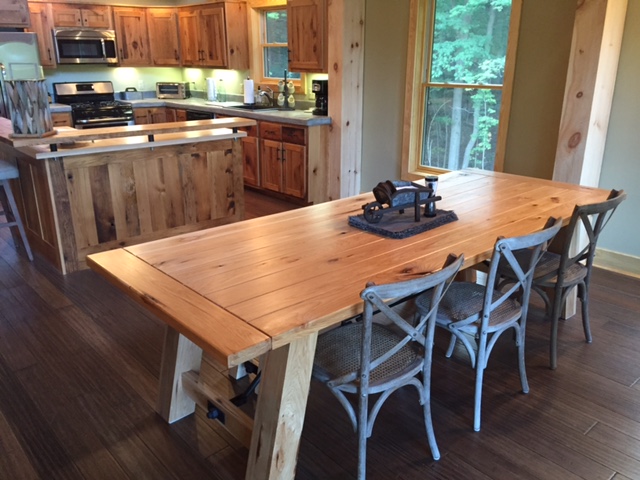 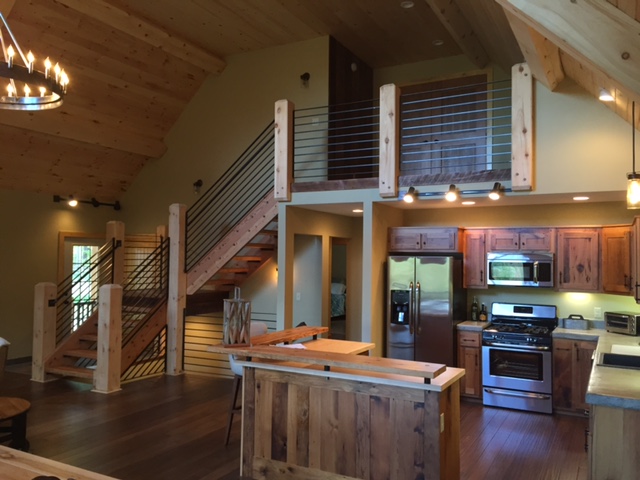 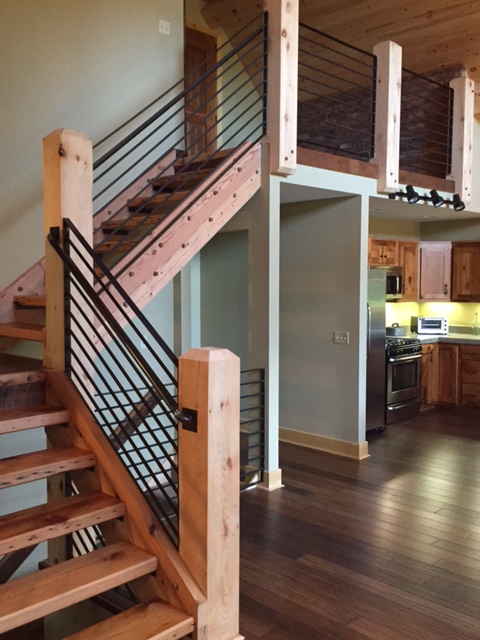 EllicottvilleNY.com: Looking for an outdoor Lifestyle that is Still in Civilization? It’s right here!

Living in a ski town, among all of the hustle and bustle that goes with the season and the sport, can be fun, but isn’t always what a family is looking for. Sometimes the escape, be it during the ski season or even during the Green Season, is just what the doctor ordered for a great lifestyle. That would be Lofty Mountain Grandeur.

That escape is exactly what Mike Icorvaia had in mind when he blazed a trail on Bailey Hill, not too far from Griffis Sculpture Park, in Ashford. In 2009, as a hobby, Icorvaia decided that the land, his personal wooded playground, would be the perfect place for others to create memories of catching that first salamander, seeing that doe and her fawn, even casting a line into a pond.

“I grew up on this land,” Icorvaia said. “I want others to experience what I grew up experiencing.”
Over the last five years, the land has grown into a nicely developed place to have a cabin in the woods, but still be safe among others. The first development area, Bailey Hill, contains 12 five-acre lots, each with deeded rights to numerous nature trails and fishing ponds on the land, are completely sold out. The second area, Rainbow Ridge, has only recently opened up for new homes. Of the 19 lots in Rainbow Ridge, one is sold and homes are going up on a few others.

Each home has a standard three bedrooms and three baths covering the 3,000 square-foot building design. Each building is a special place, according to Icorvaia.

“We use reclaimed materials,” he said, pointing to stairs made of wood from a Civil War-era barn that was disassembled from the area. “We try to build story lines into each place that tell a bit of the story of the material.”

One such place has brick from a Buffalo-area building, wood from local barns and custom-built furniture to represent an early, turn of the 20th Century industrial feel, to include a Larkin hand cart transformed into a coffee table. The wood is all locally cut and milled with each place having radiant heating.

One of the things that Icorvaia emphasizes about the larger area is that the homes, while close to others, still carry that feel of being in the middle of the woods, all by themselves. Each one with spectacular views, to include one that has a small view of Lake Erie – from central Cattaraugus County.

We were featured in the March issue of the Ellicotville Times. Read the full article here.

Lot 18 sold, work started on lot 3 at Rainbow Ridge. Put your finishing touches on it!

Don’t miss the opportunity to put your own finishing touches on the chalet now under construction. 3,000 s.f., 3 bedrooms, 3 baths, cherry hardwood floors, slate from india, granite countertops, radiant heat, large timbers inside and out, finished walk-out basement, mountain views and more. Call us today at 716-583-0535 to schedule a showing.

Mike Incorvaia remembers hiking Bailey Mountain in East Otto, N.Y., with his dad and uncle when he was a teen. It was an inspirational place at one of the highest points (1,800 feet above sea level) in Cattaraugus County. From certain spots on certain days, you can even see Lake Erie.

So, it’s no surprise that as soon as he got the chance as an adult, he and his partner in the project, Donald Matre, bought 300 acres on the mountain. After several years of careful thought and research, the partners decided to develop it. But it wouldn’t be just any development. It would be geared toward families who wanted to live and/or vacation in a secluded, peaceful, natural setting with easy access to Ellicottville, Holiday Valley, HoliMont, Griffis Sculpture Park, state parks and all the other attractions the area has to offer all year round.

To that end, Incorvaia has created a thoughtfully designed housing development, which will eventually include 32 chalet-style homes, with 3,000 square feet or more, on 5 acres each with plenty of surrounding land available for hiking, mountain biking, fishing, picnicking and more.

The development is called Lofty Mountain Grandeur, a name inspired by the hymn “How Great Thou Art.”It is just a nine-minute drive to Ellicottville, a one-hour trip to Buffalo, 2.5 hours to Toronto and zero hours to total calm and relaxation amid nature’s beauty.

Phase 1 of the project – the Bailey Hills section – began in 2009 when few were building new homes because of the recession. Undaunted, Incorvaia broke ground, believing that his special place should be shared and that once people saw the area, they would fall in love with it, too.

Bailey Hills features 13 lots (only one is still available) and 12 beautifully crafted homes with astounding views. With pricing starting at $399,000, homes feature first floor great rooms with vaulted ceilings, pegged timber beams, 6-inch wide white oak plank floors with radiant heat throughout, plus two first floor bedrooms and two baths. On the second floor is a loft overlooking the great room, along with another bedroom and bath. Basements have room for two additional bedrooms and two baths.

When Michael Incorvaia and Don Matre envisioned the Lofty Mountain Grandeur, just outside Ellicottville, they didn’t know what to expect.

The subdivision, with a picturesque setting some 2,000 feet above sea level and a postcard-like view of Cattaraugus County in the town of East Otto, was launched when the economy “tanked,” they said.

The two men, who also own Pallet Services Co., figured it would take five years to … Read More

Announcing the expansion of Lofty Mountain Grandeur with Rainbow Ridge